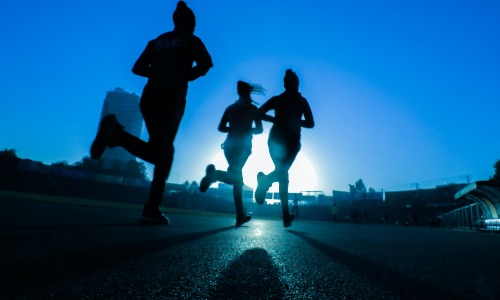 Competing in business is often compared to running a race.

It’s a good analogy, and it dovetails with the fact that in sports, there are two kinds of races: sprints and marathons.

In a sprint, the race is short. The goal is to run full speed until you cross the finish line ahead of the pack, whereupon the race is over. The winner is declared, medals awarded, and then everyone goes off to the local watering hole.

Companies that are sprinters want to grow to a certain size, achieve a solid market share, and then make a profitable exit by selling out to a larger firm. Thousands of companies do this every year. For example, in September 2022, the owners of Signify Health, which operated a network of doctors making house calls, announced they were selling the company to drugstore giant CVS. The price was roughly $8 billion. Founded in 2017 in Dallas, Texas, Signify offered analytics and technology to help a network of 10,000 doctors provide in-home health care to 2.5 million patients across the United States it would acquire. As of the time of the CVS acquisition announcement, the company had been sprinting toward the finish line for about five years. Its founders and investors anticipated a nice fat payday.

In a marathon, the race is much longer. You need to pace yourself and maintain a steady position either at the front or within striking distance. You’re thinking ahead and planning what you need to do to win, both today and in the future.

While actual marathons involving runners must eventually end at the finish line, in business, a marathon may never end! It may continue for years and even decades. In the American auto industry, the Big Three—GM, Ford, and Chrysler—have been battling for first place for nearly a century. IBM and Xerox have been at it for even longer. GE and Westinghouse have been competing for 130 years. And Proctor & Gamble has been fighting Colgate-Palmolive for over 180 years—with no sign of either side weakening!

These companies are running marathons. They fight to stay at the front of the pack as long as they can. There may be times when they’ll slip in into second or even third place, and then they’ll regroup and claw their way back to the front. For any company competing in a marathon, staying One Step Ahead for decades is an amazing feat.

The Race Is Getting Faster and Tougher

For a thousand years, no man could run a mile in under four minutes. Nobody believed it could be done. Then in 1954, Roger Bannister ran the mile in 3:59.4 minutes. At the time, this was astonishing. No one had ever run so fast! But the pace quickened. Since then, runners have gotten faster, and the four-minute barrier has been routinely broken. The current men’s record holder is Hicham El Guerrouj, with a time of 3:43.13—more than fifteen seconds faster than Bannister.

Just like the speeds set by top sprinters, the pace of business is getting faster. The rate of change is accelerating.

For example, consider Moore’s Law. In 1965, Gordon Moore, the co-founder of Fairchild Semiconductor and Intel, published a landmark article in which he proposed that due to continuing advances in manufacturing technology, the number of transistors in an integrated circuit would double every year. In 1975 he revised his prediction to doubling every two years—still an astonishing rate. He projected this rate of growth would continue for at least another ten years. In fact, Moore’s prediction has proved to be accurate for several decades, during which it has become clear that accelerating advancements in many areas of digital electronics reflect Moore’s law, including memory capacity, sensors, the number and size of pixels in digital cameras, and quality-adjusted microprocessor prices. It’s a manifestation of the fact that change in every area of business, from technology to human resources, is getting faster.

In addition to the rate of change in the marketplace—and the world—accelerating, the rate and severity of market disruption is increasing. The race itself is getting more difficult. Instead of a nice smooth path, the way forward is getting bumpier and more hazardous.

Today’s challenge is the fact that today, we have both: accelerating change and massive disruption.

As the race intensifies, staying One Step Ahead requires more speed, agility, and stamina than ever before. The technology that was cutting edge yesterday will be obsolete tomorrow. Employment practices are evolving at lightning speed. New rules, new goals, and new threats are emerging more quickly than many leaders can handle them.

We live in a time of hyper-consumerism. With just a few taps on their smartphones, consumers can buy just about anything at any time and have it delivered overnight. Businesses live or die by social ratings on digital platforms including Yelp, Google reviews, Trip Advisor, Angi, Foursquare, and many others. If a business makes its customers or employees unhappy, there’s no place to hide. Even top recruits have become picky consumers: the overwhelming majority of job seekers will not consider a role until they have researched the company on platforms such as Glassdoor.

Why Your Leadership Is Important

The accelerating rate of change in your marketplace makes leadership—your leadership—all the more important in staying One Step Ahead of the competition.

Why is your personal leadership so important?

Because if you’re not setting the pace, nothing else matters.

Not your team, your technology, your products, or your brilliant business plan.

Remember BlackBerry? In the first decade of this century, you either had a BlackBerry or you knew someone who did. Mike Lazaridis and Jim Balsillie, co-CEOs of the parent company RIM, guided BlackBerry to the top of the personal communications market. In developing the innovative device that was the first to reliably deliver e-mail over the airwaves, they turned a tiny Canadian company into a global electronics giant. For many years, BlackBerry devices were in the lead because they provided small Qwerty keyboards that made it easy to send emails and instant messages.

The response by Lazaridis and Balsillie? They ignored it. As Apple gained ground and was hot on BlackBerry’s heels, BlackBerry stuck to the idea that analog plastic keys were preferable to sleek, elegant touchscreen devices, and that if they doggedly marketed their old-school technology the phones would continue to sell.

Consumers had other ideas. As the iPhone took off, suddenly nobody wanted to be seen with a BlackBerry, and many rushed to change devices for fear of seeming to be out of touch.

BlackBerry, which had been comfortably ahead of the pack, found itself one step behind, and then falling further from the lead. As Steve Toback wrote for Moneywatch, “Balsillie and Lazaridis couldn’t have done a better job of driving the company off a cliff if they’d cut their own brake line and floored it.”

Obviously, this is not what you want a reporter from Moneywatch to write about you!

This was a case of a sprinter overtaken by a faster, more determined rival. One of the challenges of being in the lead is that you need to look back over your shoulder to see who might be gaining on you. If you only look ahead, you’ll be lulled into thinking you’ve got the market to yourself. Don’t be seduced by success—it needs to be earned every day!

Do I Need to Be a Superhero to Win?

It’s true that the rate of change in business is speeding up.

And market disruption is getting stronger and more frequent.

Does this mean that to stay One Step Ahead and win the race, you need to be superhuman?

No, you don’t have to become a superhero. You can be yourself.

You can be yourself because I’m not asking you to outrun a speeding bullet, stop a locomotive, or leap tall buildings in a single bound.

I’m asking you to stay just One Step Ahead of your competitor, who is an ordinary mortal just like you.

You’re already very good at what you do. If you weren’t, you wouldn’t be in the race. All you have to do is take your good performance and step it up a notch. Squeeze out just a little more speed. Take a slightly longer stride. Don’t stop for a latte macchiato quite so often. Focus a little more at work. Make an extra effort to engage your employees. Do the things that anyone could do if they chose to do them.

If you choose to stay One Step Ahead, then keep reading—this book was meant for you.