Leadership in the Age of Chaotic Innovation 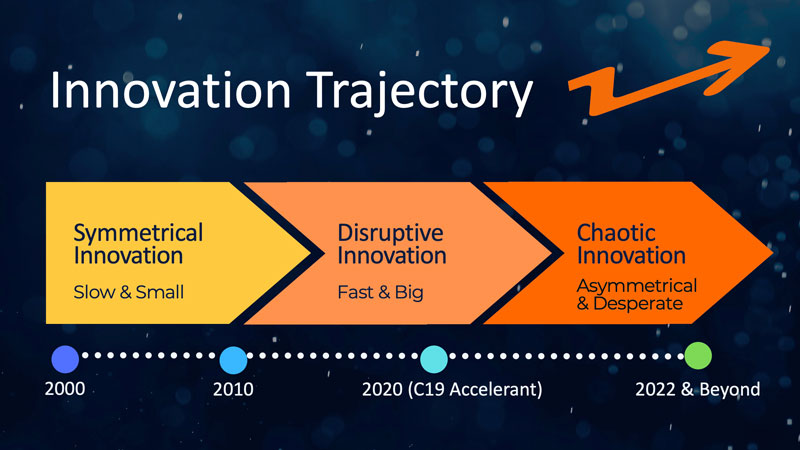 Leadership in the Age of Chaotic Innovation

You’re familiar with the various periods or ages of technology that human history has experienced. They began with the Stone Age, progressed through the Bronze and Iron Ages, then entered the Classical and Middle Ages. Around the time America was first settled by Europeans, we were in the Renaissance, and then when the United States became an independent nation, we moved into the Industrial Age. This reached its height at the end of the 20th century, when digital technology ushered in the Information Age.

Since the Stone Age, we know the rate of technological change has been accelerating, and much more rapidly in the 21st century. If we put the specific technologies aside—stone tools, iron weapons, industrial machinery, computers, etc.—we can divide technological progress into three periods of varying rate and disruption.

For the first few thousand years the rate of acceleration was slow and predictable, and disruption was minimal. We call this symmetrical innovation, whereby innovations emerged gradually and spread across the globe incrementally.

For example, take railroads. The development of railroads became feasible because of two innovations.

The first was the idea of using rails to reduce friction of heavy wheeled vehicles. Introduced in England in the 16th century, “wagonways” used wooden rails to guide cars laden with coal. The first North American “gravity road,” as it was called, was erected in 1764 for military purposes at the Niagara portage in Lewiston, New York. Gravity roads—built to haul coal and timber—used stationary steam engines to winch the cars up hill, and they coasted downhill to their destination, usually a canal.

The second innovation was the steam locomotive. The first working locomotive was built by Richard Trevithick in Wales in 1804. Eight years later, John Blenkinsop and Matthew Murray built the twin cylinder “Salamanca,” the first commercially successful steam locomotive, which was used by the Middleton Railway.

The combination of iron rails with steam locomotives provided the genesis of a transportation revolution. By the standards of today’s chaotic innovation, the growth of the railroad industry was slow and methodical. In the United States, the American railroad industry began with the first passenger and freight line of the Baltimore and Ohio Railroad in 1827. The industry grew steadily, from 40 miles of track in the entire nation in 1830 to 8,571 in 1850, and then to 28,920 miles by 1860. By 1890, while the nation’s rail network had grown to 163,562 miles, the technology—steam-powered locomotives pulling rolling cars—was basically the same. By 1902, track mileage was over 200,000 miles. In 1929, the nation’s railroad system hit its all-time maximum of 429,054 miles. It has slowly declined ever since.

While the growth of the railroads was steady and massive, it was not disruptive. In other words, other industries did not suffer because of railroads. While the nation’s small canal system and some river transport were impacted, railroads were an added industry, not a replacement industry. People did not lose their jobs because of the railroads. No factory owner ever said, “Damn that railroad for putting me out of business!”

We can see this across many symmetrical innovations. The printing press didn’t make scribes disappear because there weren’t that many scribes to begin with. Bigger sailing ships didn’t put man-powered boats out of commission. The telegraph did not kill the U.S. Post Office. These innovations increased the market without replacing significant parts of it.

You might say that the era of disruptive innovation, in which one industry replaces another, began with Henry Ford and the Model T. The industry that he nearly single-handedly wiped out was the horse industry.

In the 19th century, the horse was the ubiquitous unit of power. In cities, they transported people via carriage and horse-drawn public transport. They were used for hauling freight and for farming. By 1915, there were estimated 26 million horses and mules in the United States. That made more than one for every five people. (Think about that for a moment—all the horse feed, the manure, urine, cost of boarding, space requirements.) In 1908, Henry Ford sold the very first Model T. By 1915, the company was making over 300,000 per year. In 1920, they sold over 900,000, and in 1923 the company hit its peak with over 2 million sold.

As the automobile ascended, the horse declined—along with all of its associated industries. By 1950, there were only 7.6 million horses and mules left in the United States, with 25 million cars and a population of 151.3 million humans. As producers of commercial value, horses were gone.

In our present era, we’re experiencing disruptive innovation on steroids.

The rate and intensity of change are increasing. What was once a family-friendly roller-coaster ride at your local county fair has become a neck-snapping, gut-wrenching Super Killer Tornado at a sadistic theme park.

The primary effect of the Super Killer Tornado ride on leadership is that threats appear more suddenly than ever before, and they hit with greater force. In decades past, a leader could watch a new innovation emerge slowly, like a building wave, and—if he or she were motivated to act—take steps to mitigate the threat or even take advantage of it.

In the good old days, did many leaders fail to see threats as they grew slowly? Of course. The top brass at General Motors watched for over a decade while their business was hammered by Toyota and other imports. Their inaction led to bankruptcy—and luckily, a hard lesson learned, as GM has rebounded under new leadership.

Here’s a statistic that shouldn’t surprise you, but probably will. It’s the number of new patents that have been granted every year for the past century. According to the U.S. Patent and Trademark Office (where they keep meticulous records), in 1901, the number of all new patents granted, both utility and design, was 27,288.

For the next 60 years, through the Second World War and well into the 20th century, this number rose gradually, and in some years it even fell.

By 1961, the total number of all new patents granted—utility, design, and plant—was 50,964. This was a predictable rate of increase over previous decades.

And in 2021, the total number of all new patents granted was 375,506, well ahead of pre-Covid levels. All across America, more and more inventors are churning out new ideas. We’re also seeing a sharp increase in patent applications from foreign sources, most notably China.

Do all of these new patents change the landscape or pose a threat to an existing business? No—but many of them do. Let’s say that just one percent of new patents prove to be truly disruptive.

That would mean that in 2021, the number of new and disruptive devices unleashed in the marketplace might be 3,755.

One of those new technologies might be aimed squarely at your business.

This is just one way that virtually every aspect of your organization is the subject of rapid and deep change. This onslaught requires a new range of systems, methods, processes, tools, policies, and even a new philosophy about the way in which you approach leading your teams and your enterprise.

If we want to be masterful leaders in a time of chaotic innovation, we need to lean into the blur! For more information on the super power of lucid leadership and its impact on managing chaotic change, pick up a copy of my book, Lucid Leadership on Amazon or reach out to me with any questions you may have nick@nickwebb.com